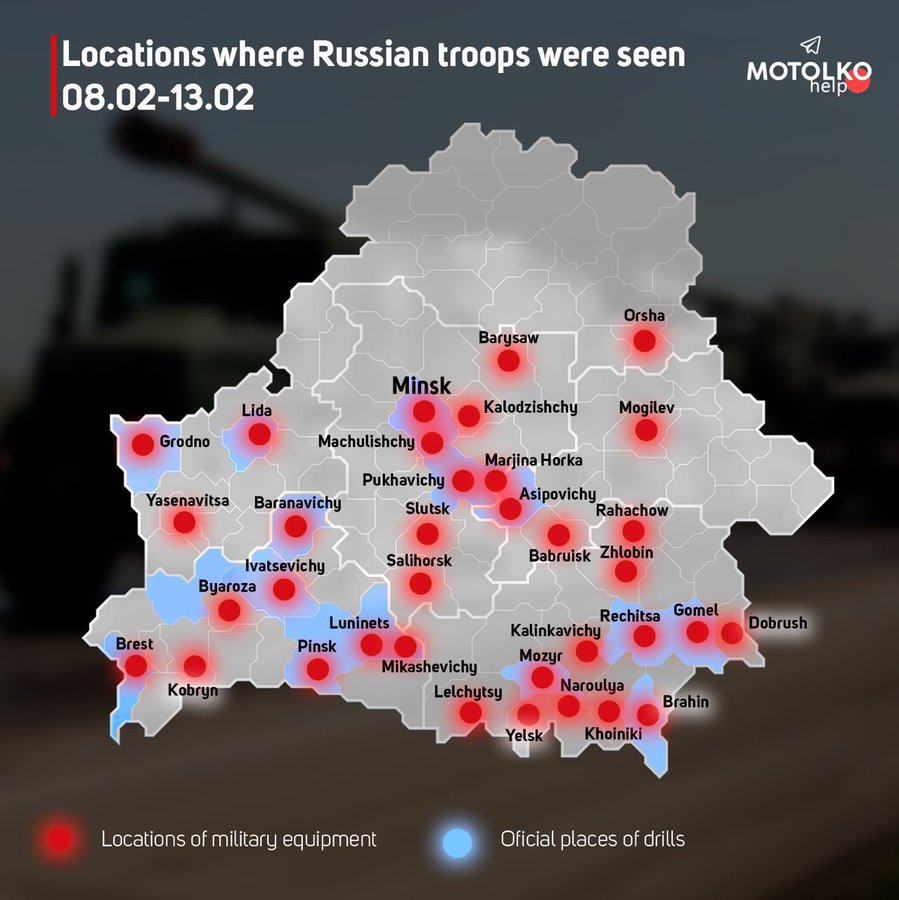 Here is what you may have missed:

The integration of Belarus into the Russian military strategy grows by leaps and bounds. The “Allied Resolve” maneuvers involving more than 30,000 troops officially commenced on February 9. According to Sviatlana Tsikhanouskaya’s spokesperson Franak Viačorka and sources in Belarus, only a part of Russian troops is actually involved in the exercise, others are deployed in secrecy outside the announced locations of the drills close to the Ukrainian border.

Minister of Foreign Affairs of Ukraine, Dmytro Kuleba, officially triggered the risk reduction mechanism in accordance with para. III of the Vienna Document and requested Russia to provide detailed explanations on military activities in the areas adjacent to the territory of Ukraine. Baltic states jointly filed a similar request. Russia failed to respond to these requests within the required 48 hours.

On February 3, Russian Defense Minister Sergey Shoigu met with Aliaksandar Lukashenka. Following the meeting, Belarus and Russia agreed to conduct 20 more joint military exercises in 2022 and approved a military-technical cooperation agreement through 2025. The agreement identifies common threats against the Union State of Belarus and Russia and sets measures for coordinated military policy, construction of regional grouping of troops, and formation of common border space. The document underlines the importance of Russian nuclear capabilities in preventing military conflicts, which opens up the possibility of Russian nuclear weapon deployment in Belarus.

The widely discussed question of formal withdrawal of Russian troops from Belarus will stay unresolved. With 20 joint military exercises planned for 2022, Russian troops will remain in Belarus on a permanent or rotational basis under the pretext of completing the drills.

On February 27, a constitutional referendum will take place in Belarus. Instead of bringing a positive dynamic to the political crisis in Belarus, the constitutional amendments would enable Lukashenka to amass power, bypassing the democratic aspiration of the Belarusian society and squeezing the already extremely narrow political field in the country. Even more importantly, the amendments tailor сonstitutional provisions to accommodate the new military doctrine of Belarus and Russia, remove the country’s neutrality status and allow the potential deployment of nuclear weapons in Belarus.

Lukashenka’s officials take unprecedented actions to ensure that controversial constitutional amendments pass. The elections committees are formed only from the pro-government and loyalists organizations. The administration plans to deploy special forces and vigilantes at the polling stations. To prevent the opposition vote, Belarusian officials refused to open polling stations outside of Belarus, depriving hundreds of thousands of Belarusian citizens of voting rights.

While the officials cite COVID safety measures as the excuse for voting restrictions, the government has implemented no COVID preventive measures, and there is still no masks mandate in Belarus despite a catastrophic increase in cases.

On February 11, Belarus confirmed 8,611 new COVID cases in just 24 hours, a staggering case rate for a country of 9 million people. According to the government’s statistics, the official death toll from the pandemic is just over 6,000 people. In 2021, a comparison of excess deaths reported to WHO revealed a 15x underreporting of COVID deaths by Belarusian officials.

In January, 696 children in Belarus were hospitalized due to COVID, including 3 in ICU. Teachers' ranks are decimated, too: PE teachers and social workers have to teach math and other subjects. In some classes, 90% of the students are unable to attend due to the high rate of infections.

Belarus received almost $1 billion from the IMF in August 2021 specifically for fighting and mitigating the COVID pandemic. Back then, various human rights organizations and Belarusian pro-democracy forces tried to block that allocation by the IMF, arguing that Lukashenko would not use it to help the Belarusian people. As was widely feared, the IMF allocations have instead gone towards political repressions supporting special police units and the military.

Political prisoners Regina Lavor, Natallia Hersche, and Uladzimir Matskevich went on hunger strikes demanding freedom, protesting illegal arrests and brutal conditions in jails that amount to torture. This is a second hunger strike for the dual Belarus and Swiss citizen Natallia Hersche who has been in jail since September 2020. Uladzim Matskevich, 65-years old prominent Belarusian philosopher and a public figure is detained since August 2021 under preliminary charges of “preparing or taking part in active actions grossly violating public order.” 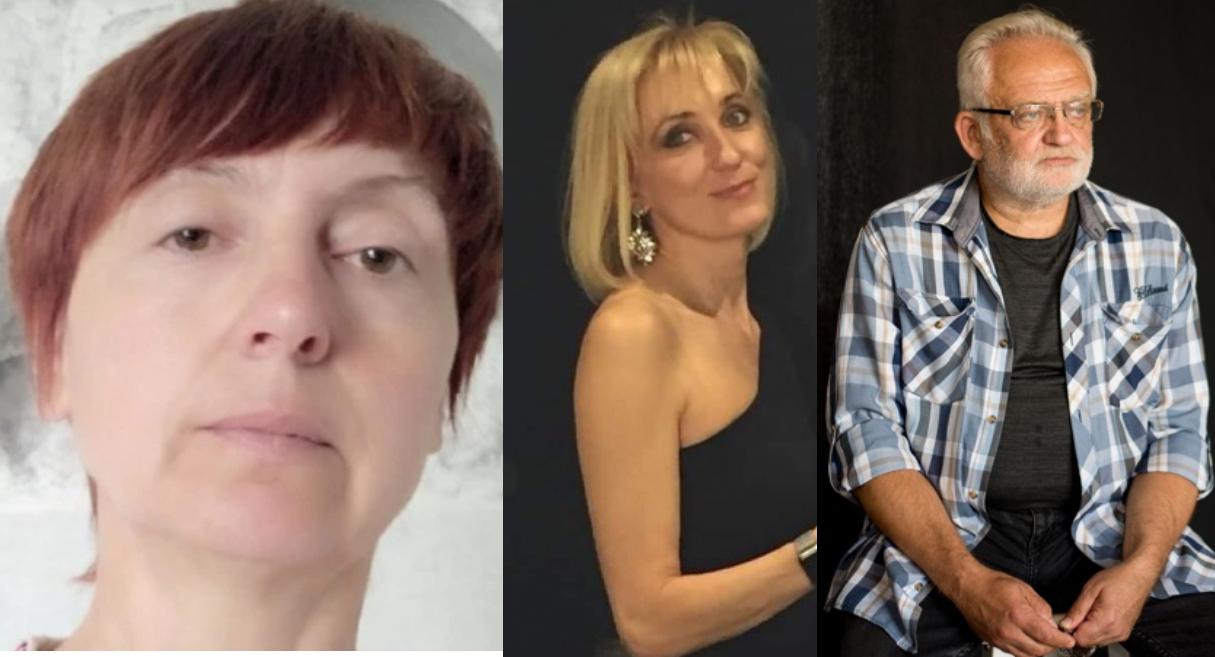 The relentless persecutions of pro-democracy activists and harsh social, political, and economic conditions in Belarus force people to leave the country. Many of them are reaching the U.S. The Belarusian political refugees facing trials in absentia, lengthy sentences, and expropriation of property in Belarus are in dire need of Temporary Protected Status in the US.

The U.S. response to deter Belarus from facilitating the invasion of Ukraine

Senator James Lankford (R-OK) introduced the Belarus Aggression Accountability Act that aims to deter Belarus from participating in the invasion of Ukraine. The U.S. Senate passed S. Res.345 introduced by co-chairs of Free Belarus Caucus Senator Shaheen and  Senator Wicker. The resolution reiterates the provisions of the Belarus Democracy Act 2020.

Concerned by the situation on the borders of Ukraine, the State Department advised the families of the U.S. embassy staff in Belarus to leave the country. The Belarus travel advisory for U.S. citizens is “Do Not Travel.” The State Department established visa restrictions on Belarusian nationals under the “Khashoggi Ban” for their involvement in the extraterritorial counter-dissident activity.

The prosecutor general of Belarus opened a criminal case against a Polish judge Dariusz Łubowski. The judge ruled the extradition case initiated by the Belarusian authorities against the Belarusian political exile and the opposition blogger, Stsiapan Putsila, inadmissible.

The Belarusian officials also initiated an international criminal case against Boris Filatov, the mayor of Dnipro, Ukraine, for replacing Lukashenka’s red-green flag with the white-red-white flag of the Belarusian pro-democracy movement.

Wilful ignorance of the Silicon Valley giants about Belarus brought new harms to the democratic aspirations of Belarusians in February. Apple mass-deactivated and later restored all iOS developer accounts registered to citizens of Belarus. On the same day, both Apple and Google blocked Telegram channels karatelibelarusi (“Belarusian enforcers”) and BlackBookBelarus in the versions of Telegram distributed through their app stores. These channels gather evidence of human rights violations in Belarus and publish personal details of the responsible public officials. The pro-government channel zheltyeslivy (“yellow leaks”) that publishes private data of democratic activists and forced public repentance videos of arrested people was not included in the Apple and Google crackdown.

Atlantic Council: Belarus emerges as key front in Putin’s war against Ukraine and the West