Despite the regime’s multiple assurances, Russian troops remained in Belarus after the joint military drills and crossed its southern border into Ukraine. Russia uses Belarusian military infrastructure to launch a ground assault and dozens of airstrikes on Ukrainian cities. Lukashenka continued to deny the well-documented involvement of the Belarusian military in the invasion until February 27. After he claimed adoption of the constitutional amendments that remove Belarus neutrality and non-nuclear status in a sham referendum, Lukashenka confirmed that Belarusian troops would be sent to Ukraine.

Belarusian American organizations petition the Biden-Harris administration and the U.S. Congress to support Ukraine and sanction the aggressor regimes of Lukashenka and Putin and derecognize Lukashenka’s regime. 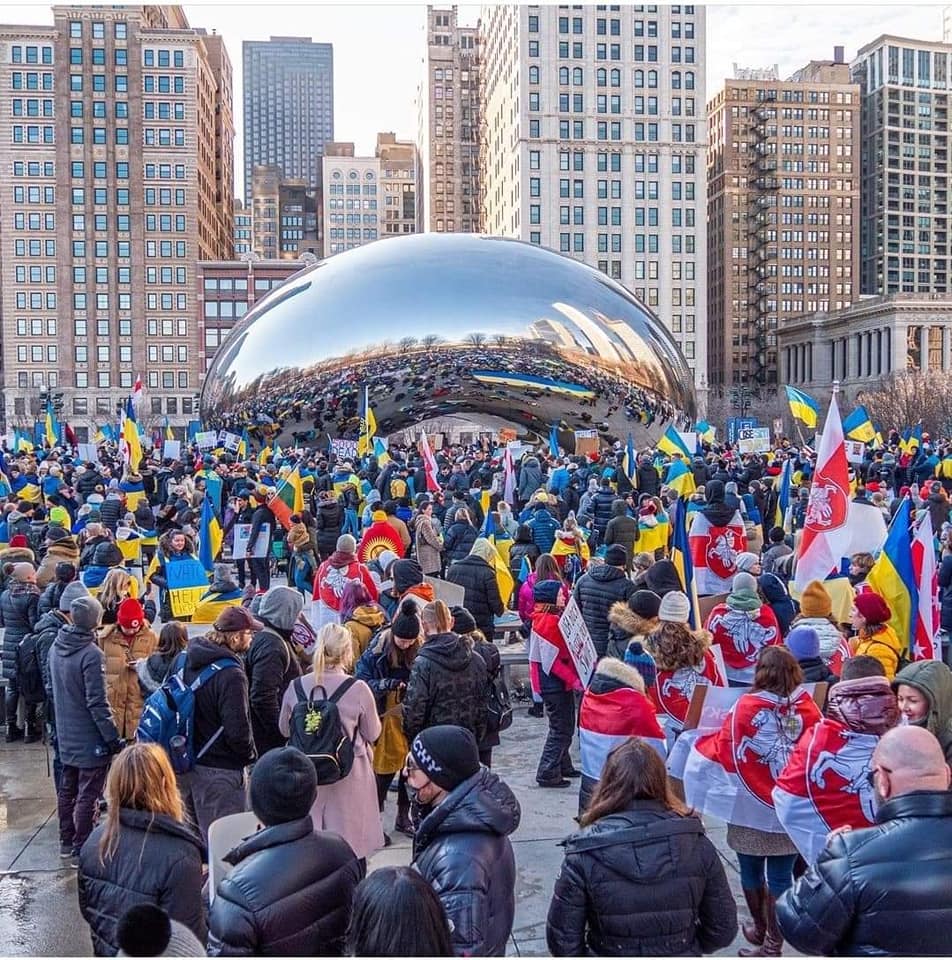 Accusing Lukashenka of high treason, Tsikhanouskaya assumed responsibility for defending the independence and sovereignty of Belarus and stated that Lukashenka committed high treason. Belarusian American organizations support her decision and call on the U.S. government to recognize Sviatlana Tsikhanouskaya as the national leader of Belarus and a representative of the Belarusian people.

Amid the joint Russia and Belarus criminal invasion of Ukraine and the continued crackdown on pro-democracy protesters in Belarus, the Belarusian political exiles found themselves in a precarious situation.

The United States has informed the United Nations it has credible information that Moscow is compiling lists of persons “to be killed or sent to camps following a military occupation,” according to a letter to the U.N. human rights chief obtained by The Washington Post.

In the letter, Bathsheba Crocker, the U.S. ambassador to the United Nations, says the Russian military’s targets would include Russian and Belarusian dissidents in exile in Ukraine, journalists and anti-corruption activists, and “vulnerable populations such as religious and ethnic minorities and LGBTQI+ persons.” (Read the full U.S. letter to the U.N.)

Belarusian American organizations urge the US government to grant migratory relief to the Belarusian political exiles and Belarusian students and activists in the United States.

The Western allies start imposing sanctions on Belarus for its complicity in the invasion of Ukraine, starting with using the joint military exercise as an excuse for leaving Russian troops in the country and then allowing them to invade and bomb Ukraine from the north.

On February 24, the US Treasury Department announced new sanctions on Belarusian individuals and entities with ties to Russia, primarily in the defense and financial sectors. Viktor Khrenin, the Belarus Defense Minister, and State Secretary of the Security Council Alyaksandr Valfovich. Two state-owned banks, Belinvestbank and Bank Dabrabyt, were sanctioned.

On February 25, Japan’s government officials stated that it was considering imposing sanctions on Belarus for its actions. Japan will coordinate the sanctions with other members of the G7.

On February 26, the EU imposed an entry ban and asset freeze on Putin, Lavrov, and a list of other Russian and Belarusian officials, including Valfovich and commanders of military detachments and installations involved in the attack on Ukraine.

On February 28, the U.S. State Department has suspended operations at the U.S. Embassy in Minsk.

February 27, the primary voting day for a sham referendum on Lukashenka’s proposed constitutional amendments, was noted by mass protests in the streets of many cities in Belarus. People gathered to say no to the illegal referendum and the bloody war on Ukraine. Belarusians burned their Belarusian passports, marched the streets, and chanted anti-war slogans. ByPol group, a union of former Belarusian security officers against the Lukashenka regime, announced a completed operation of physical damage to the railways and railroad equipment to impede the movement of the trains to the Belarusian-Ukrainian border. 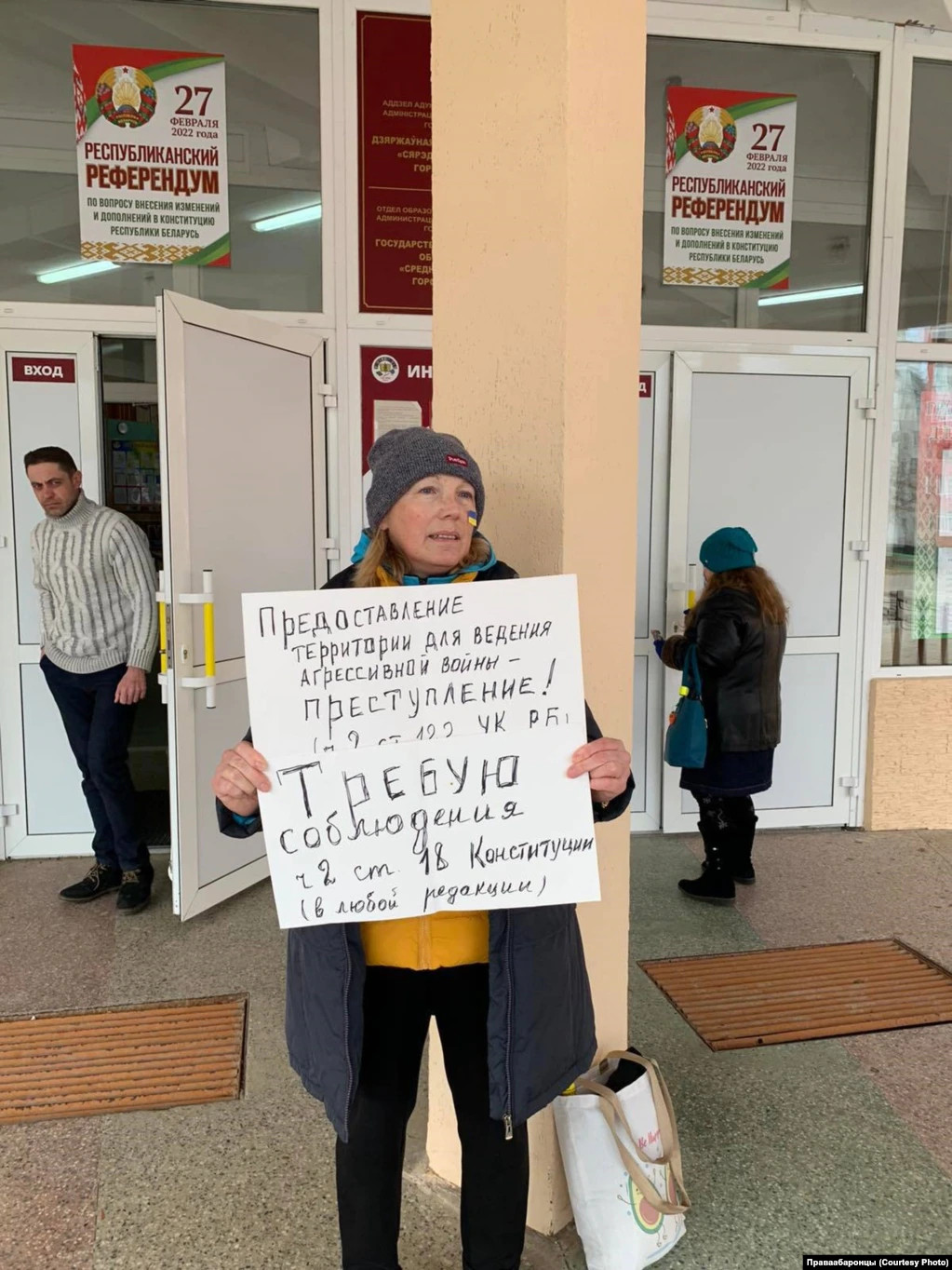 The security forces brutally detained people in the streets and at the polling stations quite often for no apparent reason. More than 800 people were arrested in Belarus on Sunday, February 27, according to the Human Rights Center Viasna.

Many Belarusians used the referendum to show their dissent and came to the voting polls to invalidate the voting bulletins, crossing out both options “for” or “against”  the constitutional amendments. 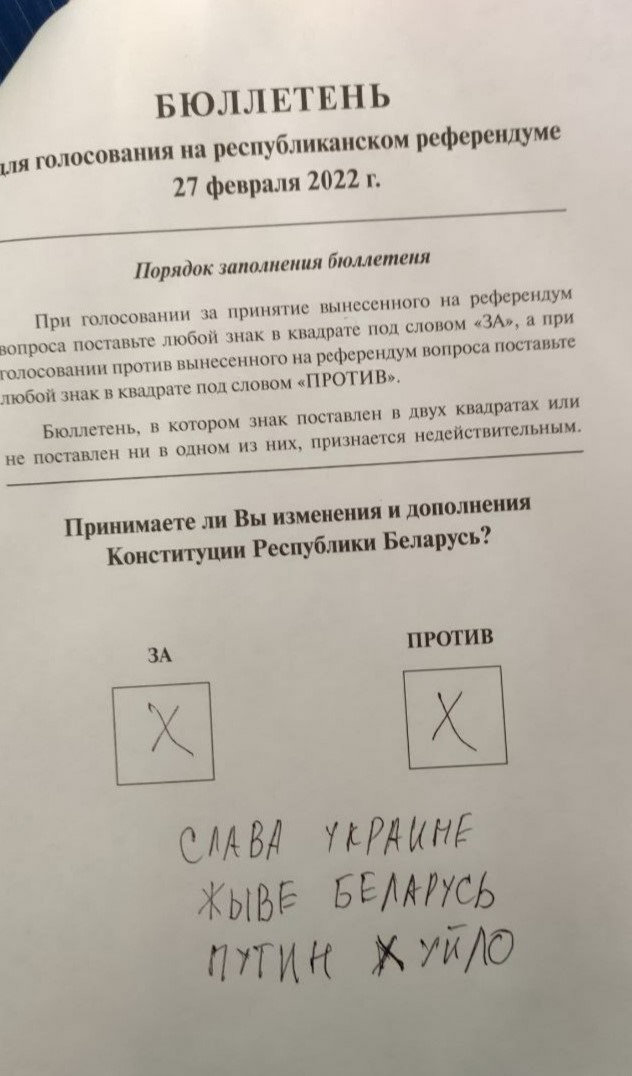 Despite the resistance to the sham referendum that failed its declared goal to correct the imbalance of powers, the authorities claimed the amendments passed with 65.16% of the vote. The new constitution did not comply with the international standards and was forced on the Belarusian people a few months after Lukashenka and Putin had signed 28 road maps and the military agreement in November 2021 and advanced the formation of the Union State of Belarus and Russia.

According to the new constitution, Belarus:

With the adoption of the new constitutional provisions, Belarus lost its independence and sovereignty. Belarus' “rubber stamp vote” on referendum worries NATO as it opens a possibility of stationing the Russian nuclear weapon in Belarus closer to the borders with the EU. The situation looks particularly gruesome in light of Putin’s direct threat to use nuclear weapons against the Western countries after the free world backlash at Putin’s invasion of Ukraine.

Natallia Hersche, a dual citizen of Belarus and Switzerland, was suddenly released on February 18 after spending 17 months in prison following a politically motivated arrest and trial. She was escorted from prison directly to the Minsk airport, where she boarded a flight to Switzerland. Her release followed the arrival of the new Swiss ambassador to Belarus in Minsk.

After a medical emergency, philosopher and political prisoner Uladzimir Matskevich ended a hunger strike that lasted two weeks, for three days of which he did not drink water. According to his released statement, he made the decision following a meeting with an investigator. The lack of investigative activities related to his arrest was one of the reasons that prompted the philosopher to go on a hunger strike.

As of February 27, 2022, 1077 Belarusian political prisoners remain in the regime’s custody.